The Violin Concerto in A minor is considered one of the masterpieces of Dvorak’s so-called Slavic period. It was written in close proximity to his first series of Slavonic Dances, the Czech Suite, the Slavonic Rhapsodies and Symphony No. 6 in D major, with which it shares its compelling folkloric melodies and overall positive expression. In his stylisation of the violin part the composer makes the most of the instrument’s lyricism, while again betraying his sense of the full, resonant orchestral sound. The piece is one of Dvorak’s most popular and most frequently performed works and is today an essential part of the international violin repertoire. 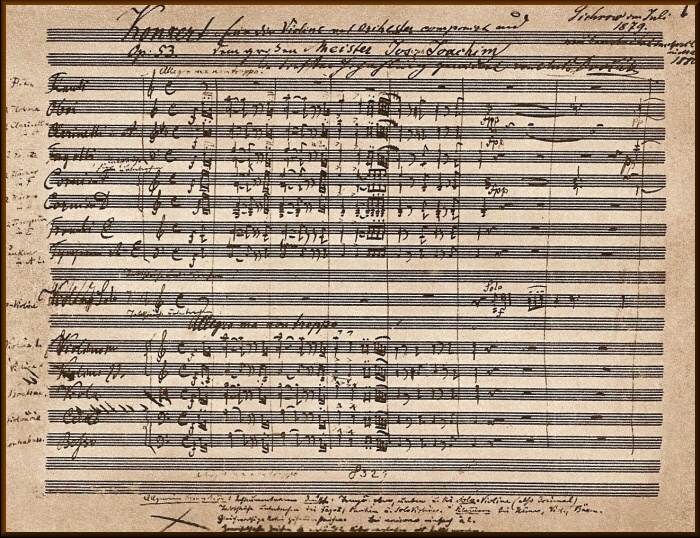 score of the 1st movement

The work was commissioned by Dvorak’s publisher Simrock, and the world premiere was to be performed by one of the most distinguished violinists of the day, the founder and director of the Hochschule fur Musik in Berlin, Joseph Joachim. The artists had previously met at the beginning of April 1879 during the composer’s visit to Berlin. Joachim was naturally already an admirer of Dvorak’s oeuvre and had probably come into contact with it through his close friend Johannes Brahms. Together with his quartet (and another two soloists) he had presented the world premiere of Dvorak’s String Sextet in A major; he also performed the same work during his tour of London and often presented other chamber works by Dvorak at concerts given by the quartet. Given Dvorak’s profile to date, the genesis of the violin concerto was relatively protracted and complex. For the purposes of simplification, its composition may be divided into four stages:

Dvorak wrote the first version of the concerto between July and September when he was invited to stay with his friend Alois Gobl at Sychrov castle. This original version essentially treated the same themes as the final version, but its formal arrangement differed considerably. The composer took the initial sketch, dated 5-13 July, with him to Berlin at the end of July, where Joachim had organised a gala evening in Dvorak’s honour. Joachim recommended certain changes which Dvorak worked into the emerging score during August and September and, in November, he sent the concerto to Joachim and awaited his comments. The title page bore the dedication “I dedicate this work to the great Maestro Jos. Joachim, with the deepest respect, Ant. Dvorak.” In an accompanying letter Dvorak expressed the wish that Joachim state his “avowed opinion” on the concerto. Joachim apologised for the fact that he was temporarily engaged, but he promised Dvorak that he would take a look at the work “con amore” as soon as possible.

No further correspondence between the two artists has survived from that time, so it is not known whether Joachim expressed an opinion on the concerto in writing or not. Whatever the case, Dvorak was able to hear the verdict from him in person when he visited Joachim in Berlin in late March and early April 1880. One can only assume that the violinist’s evaluation was not favourable since, after this consultation, the composer set about completely rewriting the concerto, a task he undertook between 4 April and 25 May. Dvorak sent this “new arrangement”, as he noted in the score, to Joachim for inspection once again. However, he had to wait more than two years for an answer.

In August 1882 Dvorak received a letter from Joachim in which the violinist explained in detail his standpoint on the current version of the concerto, and he also proposed further partial changes. These largely concerned revisions to the solo part to ensure greater facility of performance, and the need to lighten the density of the orchestral setting. Dvorak consented to these requests as well and, at Joachim’s invitation, travelled to Berlin in September so that they could play through the work together. Clearly expressing a sense of relief, the composer wrote about this to his publisher Simrock: “I played the violin concerto with Joachim twice. He liked it very much, and Mr Keller, who was present as well, was delighted with it. I was very glad that the matter has finally been sorted out. The issue of revision lay at Joachim’s door for a full two years!! He very kindly revised the violin part himself; I just have to change something in the Finale and refine the instrumentation in a number of places. I must return to Berlin at the beginning of November; everything will certainly be ready by then and Joachim will organise an orchestral rehearsal at the Academy.”

Although the protracted negotiations with Joachim had finally come to an end, further alterations to the score before its publication were still required by the publisher Simrock, specifically Simrock’s music adviser, Robert Keller. He proposed that the first two movements did not follow on attacca, but that they be completely separate. Other requirements involved the third movement, which was to be shortened. While Dvorak accepted this last suggestion in part, and made two large cuts in the Finale, he insisted on linking the first two movements. He was supported in this by violinist Pablo de Sarasate and even Simrock himself who, in the end, agreed to publish this version of the work.

In its basic outline the work maintains the traditional concertante form of three movements, of which the two outer movements are written in a faster tempo, and the middle one is slow and lyrical. Stepping slightly outside the mould, particularly in the context of Dvorak’s oeuvre, is the idea to link the first and second movements, and also the somewhat ambiguous expression of sonata form in the first movement. The piece also does not contain the traditional virtuoso solo cadenza. 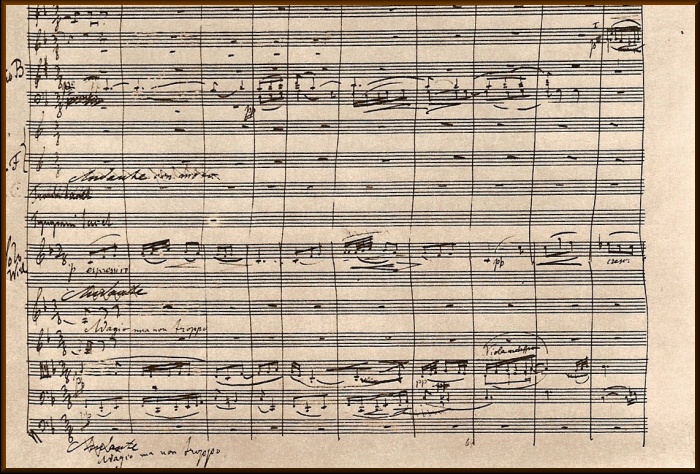 score of the 2nd movement
The first movement of the concerto is usually described as a curious combination of sonata and rondo principles. The customary orchestral exposition of the main themes is entirely absent: after a several-bar introduction which anticipates the main idea, the solo violin comes in with the main theme. Its subsequent development during the course of the movement is almost akin to an improvisation piece which, together with the loose form of the movement, lends this part of the concerto an almost rhapsodic air verging on fantasy. The second subject brings a more sedate melody in the parallel key of C major. After the spirited climax of the movement, a quasi-development section, we won’t hear the usual recapitulation: the first movement flows straight into the second movement.
The lyrical meditation of the second movement in the key of F major provides an effective contrast to the rousing appassionato of the first movement. It is distinguished for its sweeping, almost vocal melody which asserts its dominance throughout the movement despite the brusque accents of the highly rhythmical secondary theme. The whole movement is a testimony to Dvorak’s tireless melodic resourcefulness, and also to his uncommon musical imagery incorporating a number of innovative instrumental ideas (e.g. the entry of the French horns right before the end). The extraordinary impact of this movement inspired certain violinists to present it as an independent concert piece, even at the start of the 20th century.

The concerto’s third movement in rondo form is one of the composer’s most accomplished stylisations of a folk dance. While it is merely given general markings of tempo and expression, “Allegro giocoso, ma non troppo”, the main theme with its syncopated rhythms and striking vitality is clearly inspired by the furiant, a Czech folk dance. One of its secondary themes is also cemented in a syncopated rhythm. Dvorak’s instrumental mastery is as impressive as ever and, like the second movement, here we also have a series of remarkable sound effects (e.g. the solo timpani anticipating the return of the main theme). Its sunny mood and lively temperament bring this movement close to the Slavonic Dances and render it one of the composer’s most joyful musical expressions.

premiere and reception of the work

Despite the fact that the concerto is dedicated to Joseph Joachim, who was also very much involved in its genesis, and that Dvorak was certainly relying on him for the premiere, the famous violinist probably never performed the piece. By the time Dvorak was finishing the last revisions to the score, almost four years had elapsed since Joachim had commissioned the concerto, and it is possible that the violinist had now lost his initial enthusiasm for Dvorak’s new work. Dvorak’s biographer Otakar Sourek wrote in more general terms of Joachim’s reluctance to study new compositions. “He was more the director of Berlin’s Academy of Music, a respected conductor and composer, than a concert virtuoso and, if he did still perform in public, he was content with a familiar repertoire, studied years before, and did not show any desire to work on new material. He didn’t even express much willingness to perform Brahms’s concerto at first, and this a work written by his best friend.”

Fortunately, Dvorak found a satisfactory substitute for the concerto’s premiere in the young Czech violin virtuoso Frantisek Ondricek. After studying in Prague and Paris Ondricek dazzled audiences all over Europe, later also in Russia and the United States, and soon became one of the most celebrated musicians of his day. He regarded the study of Dvorak’s work as his solemn duty and frequently visited the composer in his flat in Zitna street in September and October of 1883, where he regularly rehearsed the concerto under Dvorak’s supervision. The premiere performance of the work, which also marked the start of Ondricek’s new concert tour of European cities, was held in Prague’s Rudolfinum on 14 October 1883 with the participation of the National Theatre Orchestra and conductor Moric Anger. Ondricek’s interest in Dvorak’s concerto didn’t end with the premiere, however. The violinist assiduously presented the piece at his concerts all over the world, thus helping significantly to increase its popularity with audiences at major international music venues. The first performance outside Prague was already scheduled for 2 December of that year, when it was conducted in Vienna by Hans Richter. Such was the huge success of the work that Ondricek had to repeat the performance a week later, on 10 December, when Dvorak’s piece replaced the original item on the programme, a concerto by Louis Spohr. 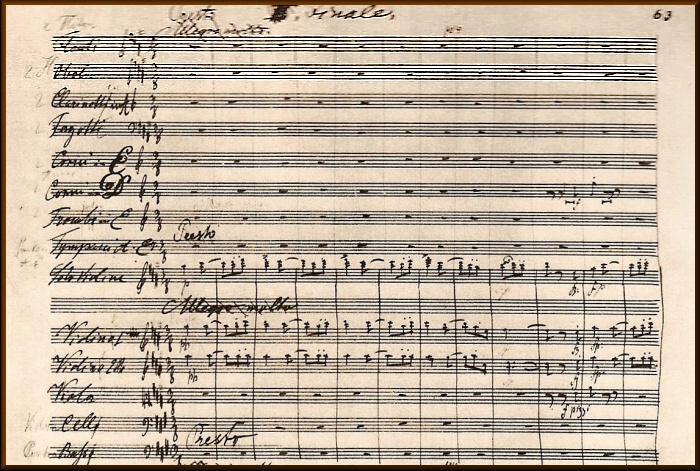 score of the 3rd movement

Dvorak’s concerto gradually became an essential part of the repertoire of Czech violinists, including Jaroslav Kocian and Jan Kubelik. The work was slower to reach international audiences, while it became more widely known thanks to the considerable endeavours of the likes of Josef Suk, Salvatore Accardo and David Oistrach.